Motion capture (mocap) has been traditionally achieved through the use of multiple cameras and actors wearing suits with reflective balls in order to locate the position of limbs in 3D space. 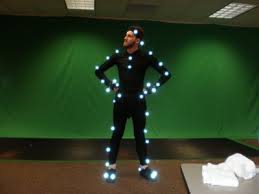 Real-time
The kinect has enabled the capture of real time body movements without the need for the mocap suit, made mocap accessible to the Open Source community and has resulted in a range of commercial applications and plugins that enable game developers to use motion capture in a range of 3D tools such as Blender, 3DMax, Maya and specialist character animation tools such as MotionBuilder.

Through the use of plugins there are examples of mocap being used directly in Games Engines such as Unity3D, Blender and CryEngine.

The next step appears to be amalgamating 3D content production with 3D delivery to create a package that is easy to use enabling non game makers to create interactive and responsive 3d scenes for the entertainment market. Rather than separately creating characters and assets using 3D tools and then importing these into a 3D games engine, iClone5 by Reallusion represents an example of how the fusion of multiple tools and work paths might be integrated into one package.