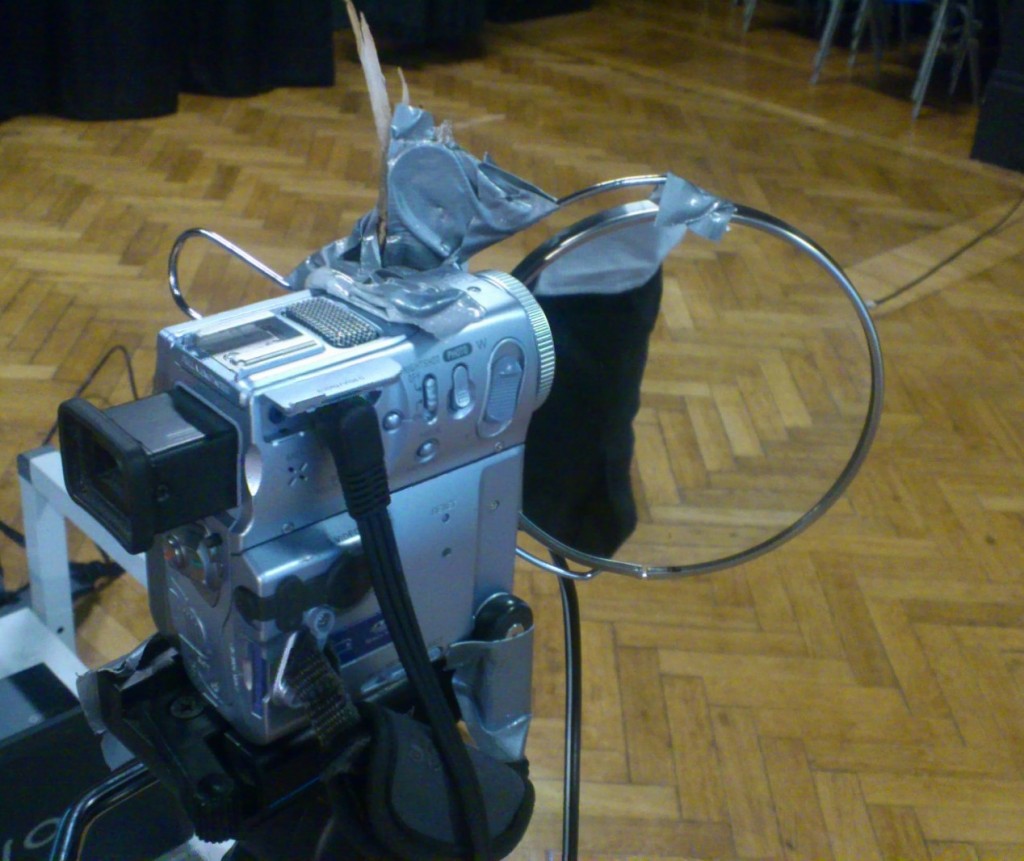 On Thursday 26th February 2015 I attended the launch of Pop Up Play at De Montford University, a free “Open Source” mixed reality toolkit for schools.

The experience of PopUpPlay was described as a hybrid mix of theatre, film, game and playground.

It was extremely refreshing and inspiring to witness the presentation of the project and experience a live hands-on demonstration of the toolkit.

The presentation included case studies with videos showing how children used the system and feedback from teachers and workshop leaders on its power and effectiveness.

Feedback from the trials indicated how  easily and rapidly children took to the technology, mastering the controls and creating content for the system.

What was especially interesting in the light of iMorphia was the open framework and inherent intermedial capabilities presented by the system. A simple interface  enabled the control of background images, webcam image input and kinect 3D body sensing, as well as control of DMX lights and the inclusion of audio and special effects .

The system also supported a wireless iPad tablet presenting a simplified and robust control interface designed for children, rather than the more feature rich computer interface. The touchable interface also enabled modification of images through familiar touch screen gestures such as pinch, expand rotate and slide.

“The overarching aims of this research project were to understand how Arts and cultural organisations can access digital technology for creative play and learning, and how we can enable children and young people to access meaningful digital realm engagement.

In response to this our specific objectives were to create a mixed reality play system and support package that could:

Two interesting observations drawn by the research team from the case studies were the role playing of the participants and the design of a set of ideation cards to help stimulate creative play.

Participants tended to adopt the roles of Technologist, Director, Player, Constructor and Observer. Though they might also swap or take on multiple roles throughout the experience. 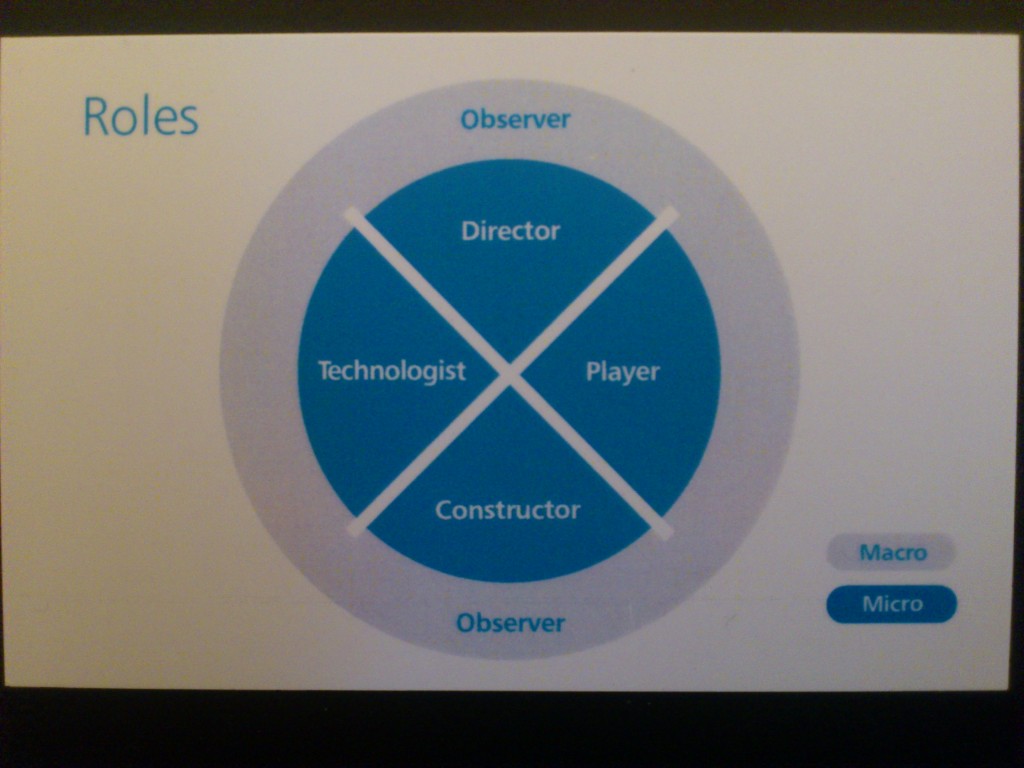 Change – change a parameter in the system.

Connect – carry out an action that makes connections in the scene.

Create – create something to be used in the scene.

Challenge – a new task to be carried out. 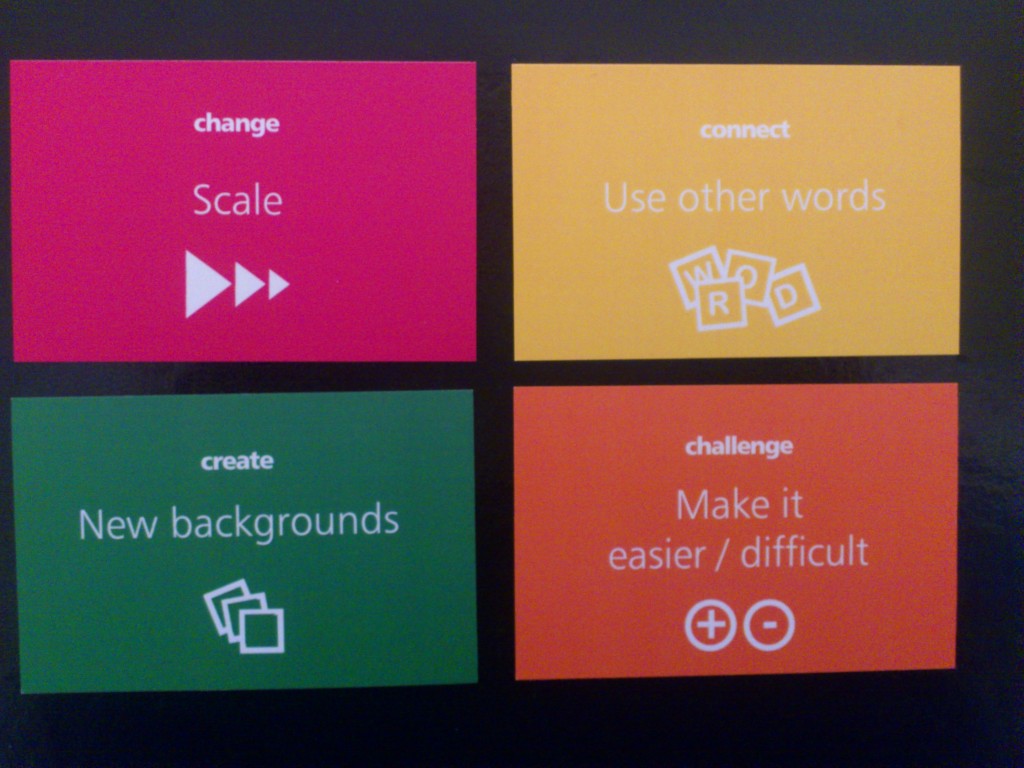 An interesting observation was that scenes generally did not last more than 3 minutes before the children became bored and something was required to change the scene in some way, hence the use of the ideation cards.

The use of ideation cards as a means of shaping or catalysing performative practise echoes one of the problems Jo Scott mentioned when a system is too open, that there would be nowhere to go and some shaping or steering mechanism was required.

A number of audience members commented on the lack of narrative structure, though the team felt that children were quite happy to make it up as they went along and the system embodied a new ontology, an iterative process moving between moment to moment which represented a new practise within creative play.

Through the Looking Glass

One of the weaknesses of the system I felt was the television screen aspect where participants watched the mixed reality on a screen in front of themselves, as if looking upon a digital mirror, which tended to cause a breakdown of the immersive effect when participants looked at each other. I felt there were problems with this approach and one of the interesting aspects of iMorphia was the removal of the watched screen, instead one watched oneself from the perspective of the audience. It would be interesting to combine Pop Up Play with the third person viewing technique utilised in iMorphia.

The lack of support for improvisation within iMorphia could be potentially addressed by the Pop Up Play interface. Though the system enables individual elements to be loaded at any time it does not currently support a structure that would enable scenes or narrative structures to be created or recalled, nor transitions between scenes to be created in the form of a trajectory. Though advertised as OpenSource, the actual system is implemented in MaxMSP which would require a license to be able to modify or add to the software.

Though very inspiring, I was viewing the system from the perspective of questioning how it might be used in live performance. Apart from the need for a hyper structure to enable the recall of scenes another problematic aspect was the need for the subject to be brightly illuminated by a very bright white LED lamp. This is a problem I also encountered when testing out face tracking, it would only work when the face was sufficiently illuminated. The Kinect webcam requires sufficient illumination to be able to “see”, unlike its inbuilt infra-red 3D tracking capability. This need for lighting then clashes with the projectors requirement of a near dark environment. Perhaps infra-red illumination or a “nightvision” low lux webcam might solve this problem.