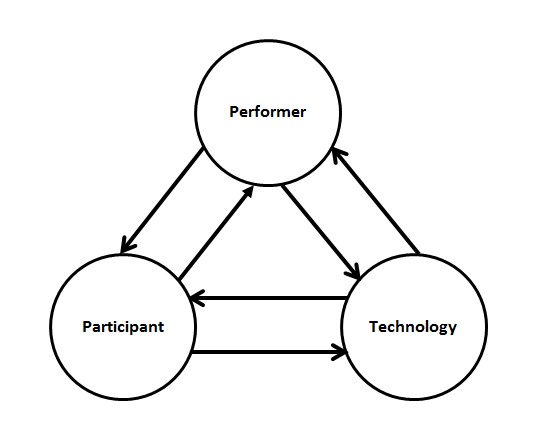 My last post, 9. Improvisation Workshop – Two Performers, was over two months ago in early August, this post, at the end of October is a brief status update.

At the end of August I attended the Fascinate conference in Falmouth where I presented a paper and ran a small workshop on iMorphia. The production of the paper served as a process of reflection and re-evaluation. The possible directions for the development of iMorphia seemed to be continually expanding and it was becoming clear I needed to try and draw the threads together and focus. I was also becoming highly aware of the increasing tension between art making and PhD thesis production. As an artist  I wanted to use iMorphia to make a piece of work, a production a live performance, something that would be surreal and uncanny. My supervisors called for focus and rigour and the production of a paper that might be presented at HCI conferences and also be of interest to the performing arts.

Early on in my proposal I had expressed the desire to use practise as a main component and had found resonance with the Manifesto for Performative Research (Haseman 2006).

How might Art as Mode of Inquiry, a method I had used in my previous research in Computer Related Design at the RCA  (1995-2001) be used as a basis for PhD Research?

Serendipitously I discovered Practise As Research in the Arts (Robin Nelson 2013) and a Kindle version enabled me to make copious notes. This was the method I wished to employ. It is highly recommended reading for any would-be Practise as Researchers, especially those, like me, based in the more traditional positivist, science and empirical branches of academia. After reading this I felt enlightened and equipped with methods and evidence to create a new direction of melding practise with theory – praxis.

The next task was to  find an appropriate research field where my work might be located, a territory that might offer similar examples of practise and associated theories that I might use to synthesise my praxis.

I began reading the thesis’s of other practitioner researchers, references taking me into Critical Theory, the fuzzy words and worlds of Continental Philosophy (Derrida et al), Object Orientated Ontology and Speculative Realism, Phenomenology and  Machinic Philosophies.

One area  rich area with exemplars of practise performance and technology is that of Intermediality; though also rather sprawling and contested, I found resonance with other practitioners and inspiring examples of practise. One example in particular being the work of Jo Scott, someone I had referred to very earlier on in my early PhD proposal.

“This practice-as-research project addresses liveness in performance and investigates its construction and manifestation, specifically within an intermedial context. Taking as its starting point definitions of liveness posited by Peggy Phelan, Philip Auslander and Erika Fischer-Lichte, the focus of the research is to interrogate such definitions through practice.” (Jo Scott 2013)

In her paper, “Dispersed and Dislocated: The construction of liveness in live intermedial performance”, Scott (2012) discusses how her practice based research informs theories on liveness and intermediality, arguing that two essential elements to creating a sense of liveness is the real-time nature of the technology enhanced performance unfolding in space and time and the unpredictability of its direction at any moment in time.”

In her writing Jo made reference to “Intermediality in Theatre and Performance” (Chapple, Freda and Kattenbelt, Chiel 2006)  though unable to find a copy of the book, an updated online version Mapping Intermediality in Performance was available and here I found a resource full of writings and examples that produced further resonance with my own rather foggy directions of where I wanted to head in my research in ‘multi-modal performance and technology’.

Rather than the traditional approach of producing a written thesis, PaR advocates a PhD submission which includes practise (live performance), documentary evidence of practise (DVD) and “complementary writing”. In addition notes, copies of journals and a website such as this are all recognised as evidence of research.

Rigour not only extends to knowledge of the field (writing, practise) but also evidence of criticality and self awareness of ones own approach to the research, especially making the assumed or hidden approaches of the artist (tacit knowledge) visible and explicit.

I am currently working on my ‘complementary writing’ with references and acknowledgements to practises and theory. How might iMorphia be informed and refined through the discourse of intermediality? Are there  other discourses that I might use? What form might the new practise take? What theories might be imbricated to produce praxis?

Where next? What next?  How?
Theory and Practise = Praxis.