On the 2nd of June I demonstrated a new version of iMorphia at a public art event Film Free and Easy in the Primary Art Studios in Nottingham.

By pressing a mouse button, the new version enabled the instant changing of a character between male and  female, plus the addition or not of tattoos. Rather than costuming the characters, I chose to create naked characters using the latest edition of MakeHuman. The idea of a person donning a white boiler suit over their clothes then appearing virtually naked I felt added an element of risk and surreal drama to the occasion.

Five visitors to the exhibition chose to experience iMorphia whilst a small audience watched the proceedings. Positive feedback from the participants and audience confirmed the effectiveness of the illusion in producing a strange and disturbing unworldly ghost like character. One person commenting that from a distance they thought they were watching a film, until they came closer and were surprised in realising the character was being projected onto and controlled in real time by a performer.

Recorded footage of iMorphia once again demonstrated how participants creatively exploited glitches produced by Kinect tracking errors. Laughter resulting from one of the participants breaking the tracking entirely by squatting down:

In order to evaluate the effectiveness and to gain critical feedback of ‘iMorphia’ the prototype performance system, fourteen performers took part in a series of workshops which were carried out between the 14th and 18th April 2014 in the Mixed Reality Lab at Nottingham University.

One of the key observations was that content effects performative behaviour. This was originally posed as a research question in October 2013:

“Can the projected illusion affect the actor such that they feel embodied by the characteristics of the virtual character? ”

An interesting observation was the powerful and often liberating effect of changing the gender of male and female participants, producing comments such as “I feel quite powerful like this” (f->m), “I feel more sensual” (m->f).

All participants when in opposite gender expressed awareness of stereotypes, males not wanting to behave in what they perceived as a stereotypical fashion towards the female character, whilst females in male character seemed to relish the idea of playing with male stereotypes. These reactions reflect a contemporary post feminism society where the act of stereotyping females has strong political issues. A number of males reported how they felt that they had to respect the female character as if it had an independent life.

One participant likened the effect of changing gender to the medieval ‘Festival of Fools’, where putting on clothes of the opposite gender is a foolish thing to do and gives permission to play the fool and to break rules, which was once regarded as a powerful and liberating thing to be able to do. This sentiment was echoed by a number of participants, that the system gave you freedom and permission to be other, other than ones normal everyday self and removed from people’s expectations of how one is supposed to behave.

In summary the key observations resulting from the workshops were:

i) The effectiveness of body projection in creating an embodied character that is sufficiently convincing and effective in creating a suspension of disbelief in both performer and audience.

ii) How system artefacts such as lag and glitches from tracking errors were exploited by performers to explore notions of the double and the uncanny.

The video below contains short extracts from the four hours of recorded video, with text overlays of comments by the performers. 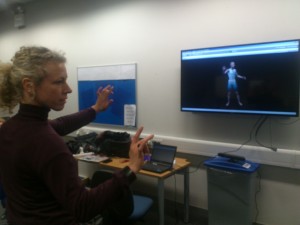 Below are videos taken from a number of participants acting as an early form of “user testing”, an HCI term I am borrowing for purposes of illustration. Strictly speaking it is not classic user testing as no official ethnographic studies were carried out –  research questions were not formulated or posed, nor any user interviews or recorded user feedback carried out.  However as a form of open ended user feedback the “experiments” (another value laden term in classic research) proved useful and also underlined the value of exposing the system to more participants in the form of the forthcoming workshops.

Applying a form of auto-ethnographic analysis I observed that new participants highlighted the differences  between someone versed with using the system (myself) and its constraints such as tracking speed and coherence of body mapping.

New users pushed the limits of the system  and gave positive feedback on “glitches” I had tried to avoid – such as system mis-tracking resulting in a limb jumping out of place or characters contorting in an unrealistic fashion.

Verbal feedback of female participants puppeteering a male and a female character also proved interesting. One performer commented on the challenge she felt on becoming the surfer dude character –  visually judging them as the sort of person she would not want to talk to in every day life. This observation suggests a series of further tests and the creation of a range characters that people might feel uncomfortable with.

Another female participant commented on the feeling of alienation of appearing as a male, stating that she knew she was a woman and not a male so felt  a strong disconnection with the projected character, the same participant from her comments appeared to feel more disturbed when taking on the realistic female character in a bathing costume, and used the term uncanny without prompting. Such reactions might also be connected with “cognitive  dissonance”.  However if I wished to analyse peoples reactions to taking on differing projected genders from a psychological perspective I would need to bring in expert help.