Last week I attended WSD 2013 and witnessed a multitude and variety of performances, participated in workshops and visited an international exhibition of performance design.
The event was held in the spectacular Royal Welsh College of Music and Drama 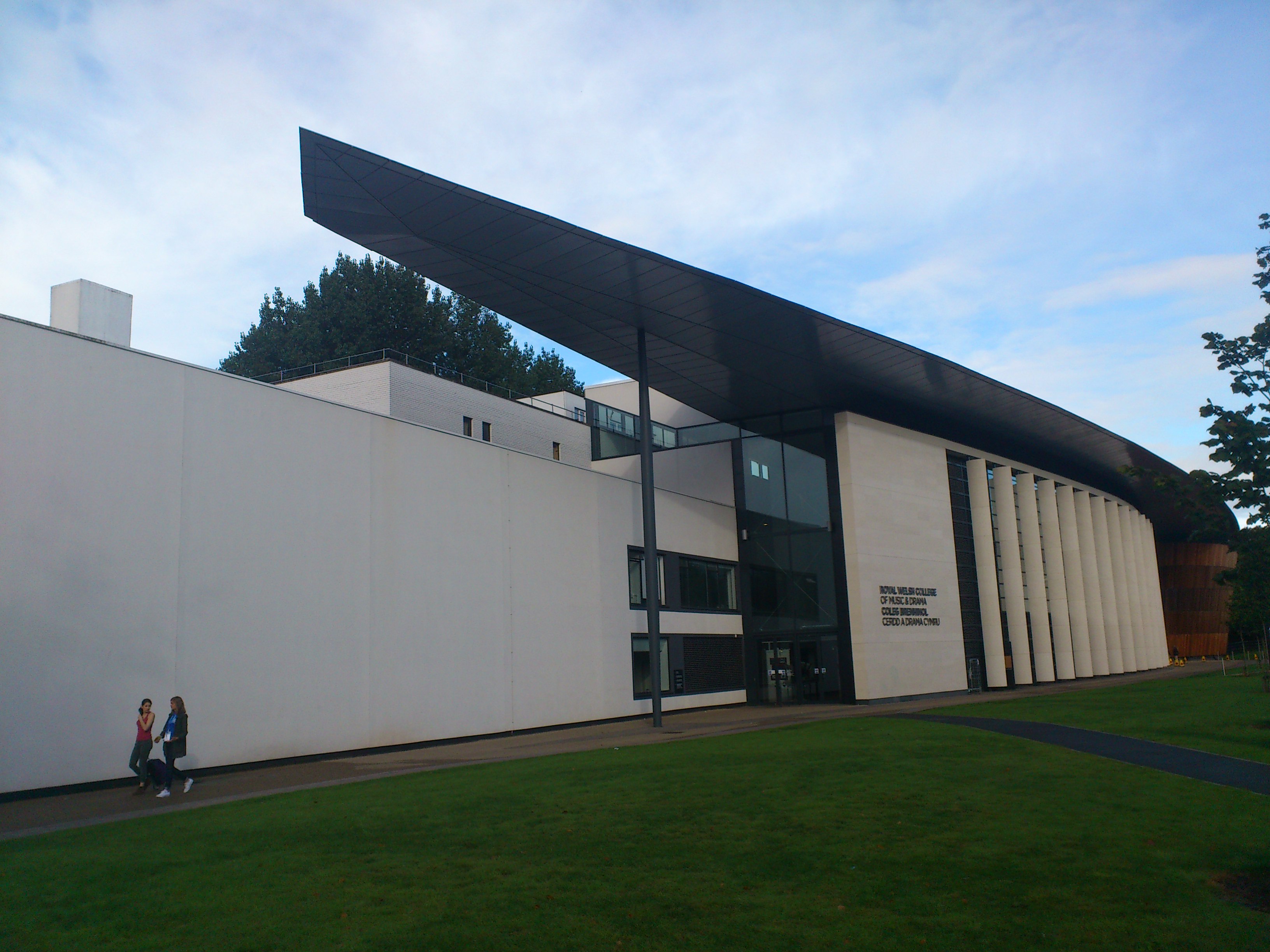 In relationship to my PhD I was primarily interested in the use of live interactive media, video projection and sound.
However I came away with the sense that the more technology is used in a performance the less the content delivers, I will address this rather worrying view later.

The work that moved me the most was Schroedinger’s Cat by Reckless Sleepers.
The performance used no technology whatsoever, apart from lighting. In the centre of the stage stood a frame like box on which the actors constantly scribbled and erased cryptic messages with chalk, hoisted themselves and each other sideways and upwards through flaps and doors. 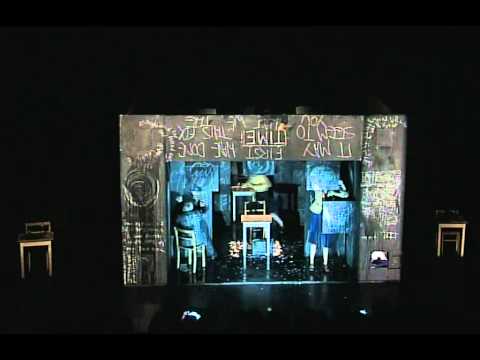 This was raw and intense physical theatre with a completely fractured non linear narrative. On leaving the performance the real world appeared as theatre, a couple highlighted in a flat, a torn poster blowing in the wind, the rain glistening on the wet pavement..

In contrast the high tech interactive dance performance The Seventh Sense, though technically very clever and the dancers very adept, left me cold. I felt as if I was watching a large scale interactive screen saver. 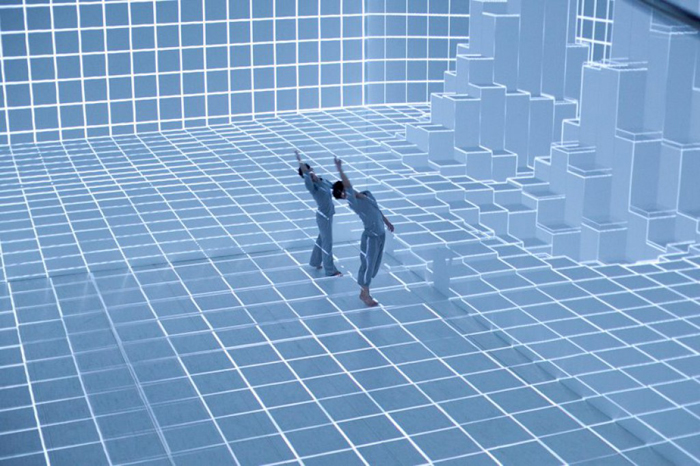 The show began with amoebae like blobs changing colour and following people wandering around the stage – this seemed to me a technical demonstration of the system, and during the introduction we were invited to come back after the performance and play with the system. This for me, set the tone of technique over content.

Perhaps I am not so tuned into dance, though I did see D.A.V.E.(Digital Amplified Video Engine) in 1998 which used projection mapping of human forms onto a dancer synchronised to the dancers movements, transforming and distorting the age, body and sex of the dancer. 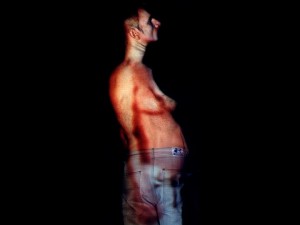 (photo of D.A.V.E by Marianne Weiss)

Ole Kristensen gave a fascinating and informative workshop on Making Your Computer See, explaining the techniques of Infra red lighting and projection, the use of the Microsoft Kinect, Open Source tools and software including the language Processing (recommended for prototyping, but not for large scale real-time projects). 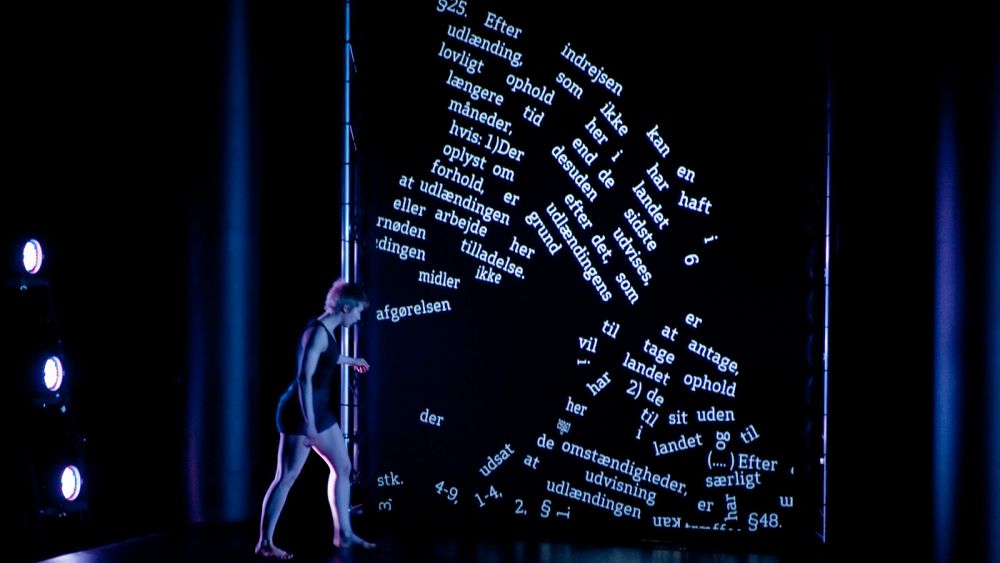 Ole also included videos of projects he has worked on, a number of which the content and the technology did appear to have a successful symbiotic relationship.

Love.Abz involved three performers of different nationalities (Finnish, German and American?) trying to work and improvise with live speech recognition.The mis-recognition of words generated some amusing sentences, for the performers and audience alike. However the content was based around a obscure piece of Finnish literature and the performance though amusing ultimately did not have any real content or story to tell. 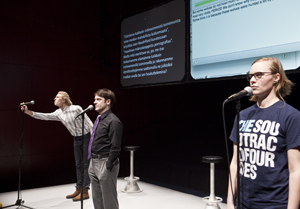 It was an interesting concept, but listening to Finnish words being read and translated live into Welsh and English was not enough to sustain an hour long performance.

The Ballad of Skinny Lattes and Vintage Clothing 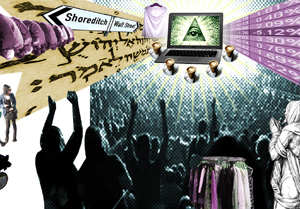 “A six-movement “noise opera”;  a satire that charts the rise of a Revolutionary Middle Class as it struggles to regain control of its’ local neighbourhood from a mythical Zionist cabal of global banking corporations. It is a story of gentrification, anti-semitism and austerity and how the financial and political turmoil’s of the 1930’s have come back to haunt us”

With reference to Futurism and Russollo’s Art of Noises I had high expectations of a multi media cacophony and assault on my senses. It was quite the reverse!

Joseph Young performed under the guise of Giuseppe Marinetti in a stylish suit and appropriate manner to a relation of F.T. Marinetti. The performance began in an interesting lecture form connecting ideas from Futurism, art and performance with Capitalism banking and Wall Street; then moved into surreal musical numbers, including a live dub section accompanied by background coloured videos of the London riots and concluded.. . with an amusing mock Sinatra vaudeville number entitled Shoredification..

A most disconcerting section involved fiercely concentrated gestures and movements coaxing sounds from an interactive wand. 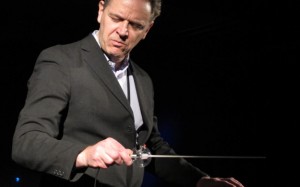 This section appeared to be more concerned with interactive technology and felt completely irrelevant to the overall theme of skinny lattes, vintage clothing and anti-capitalism. It was not clear what the purpose of this section was, what the device was meant to represent, nor the relevance of the sounds or the performative gestures used to produce the sounds.